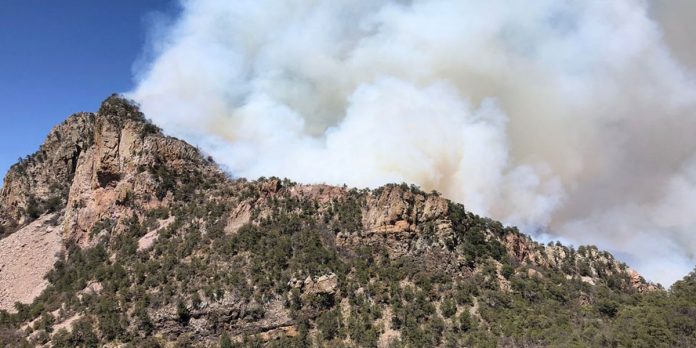 Firefighters are now battling a 600-acre blaze that has been burning in Big Bend National Park for at least three days.

The South Rim Fire, which was first spotted on Thursday, calmed down overnight, did not spread into the Chisos Basin, and is now retreating down Boot Canyon, according to the National Park Service.

The South Rim Fire started small, covering about 15 acres, but thanks to strong winds, warm temperatures, and low humidity, it had grown to 600 acres by Saturday, and the Park Service predicted it would continue to spread.

The fire had reached the summit of Emory Peak by 4 p.m. Saturday and could be seen from the Chisos Basin built area about 2,000 feet below, according to the Park Service.

The fire appeared to start on the southern edge of the South Rim of the Chisos Mountains, a rugged and inaccessible area with limited access, though the cause has not been determined.

According to Incident Commander D.W. Ivans, the cliffs and terrain that make accessing the fire more difficult may help slow its spread and give firefighters a chance to contain it.