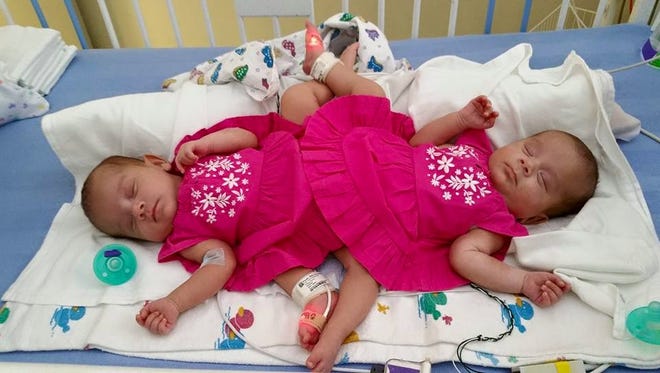 Conjoined twin girls from Brownsville have split in a Corpus Christi hospital five years ago.

It’s unusual to see conjoined twins in a triplet birth, but it’s even more unusual that they’re all alive and well, according to doctors.

Finding out you’re going to be a mother is a shock for most women, but Silvia Hernandez-Ambriz had an even bigger surprise in store.

“When I found out, I was three months pregnant,” Hernandez-Ambriz said in Spanish. “I couldn’t believe it when they told me there were three girls who arrived together.”

Having identical triplets is unusual in and of itself, but having two of them conjoined is even more unusual, according to Dr. Stephen Almond.

Driscoll Children’s Hospital doctors determined that they had the tools to give the babies the best chance of not only survival but also a normal life. Ximena and Scarlett both had a long way to go after 12 hours of surgery.

“One team remained with one child and the other went with the other,” Dr. Almond explained. “They required anesthesiology, orthopedic surgery, and general surgery,” says the doctor.

Doctors have yet to find a case of conjoined twins born as triplets living more than a year, but the girls in this case defied the odds—and continue to do so every day.

“Someone was watching out for us because the recovery period was well ahead of schedule every step of the way, not just during the separation, but also afterward,” Dr. Patel said.

Today, all three children, Ximena, Scarlett, and Catalina, who are five years old, are doing well.

“I think the doctors gave them a second life,” Hernandez-Ambriz said. “A second chance to live.”