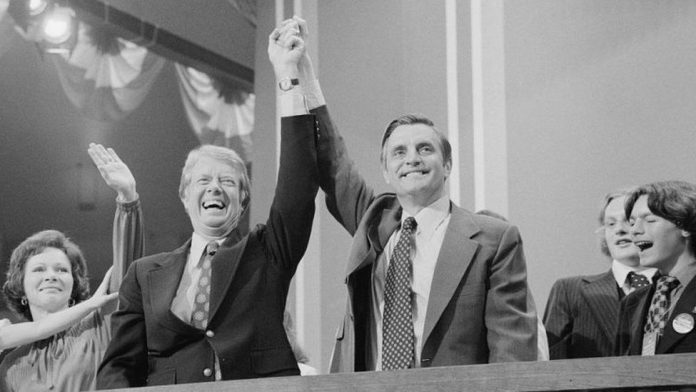 Walter Frederick “Fritz” Mondale, an American politician, diplomat, and lawyer who served as the 42nd Vice President from 1977 to 1981 under President Jimmy Carter has died this Monday.

The family of Mondale confirmed on Monday night that he died in Minneapolis.

Kathy Tunheim, a spokeswoman for the family, did not specify a cause but said that Mondale spoke over the weekend with former President Jimmy Carter, under whom he served; with President Biden and his wife, Jill Biden; and with Vice President Kamala Harris. And he sent a farewell email to his former staff members.

President Biden said in his message of condolence that when then-Senator Barack Obama asked him to consider running for vice president alongside him in 2008, “Fritz was my first call and trusted guide.” He said that Mondale’s redefining the vice presidency “as a full partnership” had “helped provide a model for my service.” And he noted that Mondale “was the first presidential nominee of either party to elect a woman as his running mate, and I know how pleased he was to be able to see Kamala Harris become vice president.”

In Modale’s farewell email to his staff, sent this past Saturday, he wrote: “Well, my time has come. I am eager to rejoin Joan and Eleanor. Before I go I wanted to let you know how much you mean to me. Never has a public servant had a better group of people working at their side! Together we have accomplished so much, and I know you will keep up the good fight.”