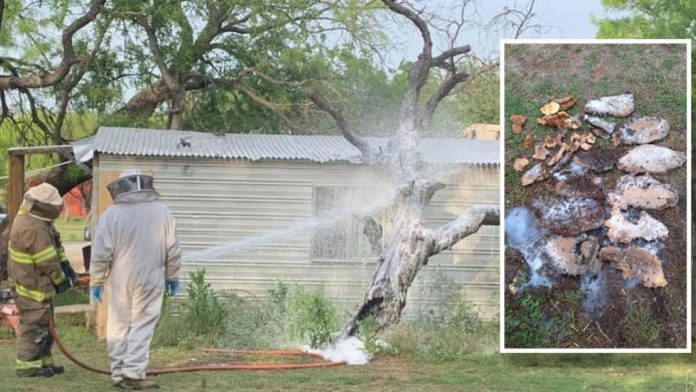 According to firefighters, one person died after being stung by a swarm of bees at a home in North Central Texas on Monday.

The Breckenridge Fire Department said the attack occurred Monday afternoon in a rural area near Hubbard Creek Lake in Stephens County, about 120 miles west of Fort Worth, according to a Facebook post.

As firefighters and sheriff’s deputies entered the house, they encountered “very violent bee activity” and “a swarm of bees,” with one person suffering from heart attacks after being heavily stung.

When the woman was taken outside, away from the swarm, a firefighter removed his own protective gear to help protect her.

According to firefighters, one person died as a result of the attack. The identity of the individual has not been revealed.

According to the post, a second person was taken to the hospital for treatment.

As beekeepers demolished the swarm’s hive, which seemed to fill the inside of a hollowed-out tree, other first responders went door-to-door warning residents not to use noisy machinery outside. The beehive was removed after being sprayed with foam.

“During the assault, first responders were faced with the difficult task of patient care and recovery and remained professional throughout the ordeal.”