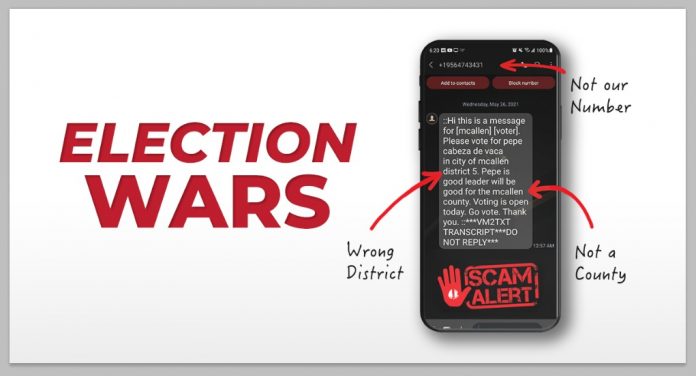 MCALLEN, TX.- Election day is approaching us, the City and its commissions will have an elected candidate in a few days, which will also mean an end to what has seemed a war between candidates; a practice that residents thought was long gone is having an unpleasant come back.

Residents have been expecting proposals and credentials for Candidates, but some have decided to punch below the belt at our local elections, which have left residents not only disappointed but also confused about what will happen if those candidates with unethical practices get elected.

The most recent one, calls, and texts made in the middle of the night to residents pretending to be part of District 6 Commissioner Candidate Pepe Cabeza de Vaca Campaign.

Accusations seem relevant when the work of Candidates cannot back off their proposals or when they aren’t good enough.

Residents deserve a clean runoff where voters can decide by themselves whether the candidate they are voting for is honorable enough to represent them.

Gossips by media sensationalists shouldn’t be relevant in an important election, but the work and proposals made by candidates.

McAllen residents should be respected by those running for office, nothing less will be expected of them.

Only our vote can prevent us from having unethical representatives.

Early voting is still ongoing and will run every day through June 1 except for Sunday, May 30.